Hope you are having or had a good long weekend!

I had a great Thanxgiving weekend. Two good meals, one at my Boyfriend's Mom's house in the burbs with most of his family there, and then later that evening a less traditional meal with some good friends on the 22nd floor of a tower in town with cocktails there. All bases covered.

We also saw two good movies... well... two movies that were better than most of the shit I have paid to sit through lately:

Casino Royale was great. The new Bond is unbelievably hot, don't care what your type is, he is hot. Even a straight guy would have to admit, that, "Yeah, he's pretty hot." He didn't have to do much acting... a lot of pursed lips and long stares, but with those eyes... woof. The story was pretty good too. Lots of nice nods to the old movies, little tongue in cheek touches that really made the movie for me. I missed Miss Moneypenny though, and Q. Maybe next movie.

Next up was Bobby, which I thought was really cool. Nothing amazing, but certainly very cool. Outstanding cast. Total love letter to RFK. I had no idea until the credits rolled that Emilio Estevez wrote and directed it. What it was missing for me was the epilogue. You know, "Two years later [character name] went on to become Secretary of Transportation under..." Didn't get any of that.

So both of those get my recommendation. Just a side note, we saw Bobby on Friday at a theater in a mall... and I gotta tell ya, the mall was not crowded. I wonder if that "day after Thanxgiving" shopping thing, Black Friday, is starting to end.

The dog sitting was uneventful. He ate, we walked, he pooped... I forgot to take his picture though... I'm sure you could find one that looks like him on flikr (Awwwwwwwww). Dad paid me for my hard work watching his dog with a half rack of Coors Light! No slowing down with the SILVER BULLET baby!

The big surprise of the weekend (so far) came when I got home from the dog sitting and the dinners. I spent Wednesday and Thursday night at my folks house. While I was gone, construction on the restaurant they are building directly below my unit continued. Yes, Directly beneath me they are building a restaurant. Which I really am very excited about. It's a chain, but kind of an upscale kind of place. Will be nice to have in the 'hood. This place is RIGHT underneath me. So during construction they are constantly drilling into their celling (my floor) in order to attach anchors that they will hang the false celling and AC ducts and all that from. It's a very scary and VERY LOUD sound when they fire up the drill or percussion hammer or whatever they are using to make the holes... sounds like they are coming up through the floor. In fact: 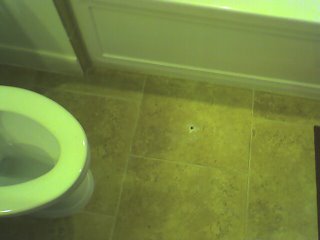 Can you see that? Look right in front of the toilet. Imagine you are sitting on the toilet and look right where your left foot might be. See that? It looks like... 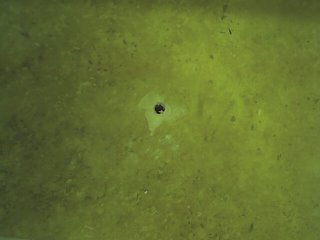 A DRILL CAME UP THROUGH MY FLOOR FROM THE CONSTRUCTION BELOW! They came up so hard through the floor with that thing that a chip of the tile ended up in my TUB! Needless to say, not happy me. When I went down to talk to them about it, they assured me that it could not have been them. "No one's been drilling," the foreman assured me. When he finally came up to look it was clear that, yes his workmen had done it... so I'll be getting a new tile. Freaking weird though... like a tiny little invasion of privacy. I'm also wondering what this says about the construction of my building. I know the floors are several inches thick of solid concrete, I watched them build the place. Just weird.

The restaurant is slated to open in a couple weeks. Here's hoping that the hole in my floor is the last time I'll have to deal with anything coming up from below!

Just a housekeeping note: my second all electronically handled mortgage and HOA payments were transmitted yesterday. No fuss, no muss. My system is holding up!

Next time: Just in time for the holidays, some of THIS NEW CONDO's favorite things.
Posted by CondoBlogger at 8:44 AM

OM freakin GOD!! a drill coming thru the floor is insane!!